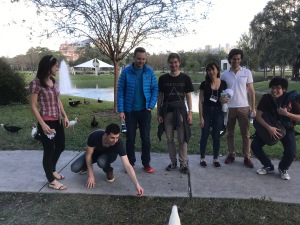 I haven’t had a chance to give an update on the IMO7 Workshop, but my teammate, Matthew Wicker, wrote up an extensive blog post on our project over on Artem Kaznatcheev’s blog. I felt it best to point everyone to read his write-up.

I had a lot of fun at this workshop; however, it was different from the one I attended in 2016. This year (2017 now) was focused on ovarian cancer and unfortunately we were rather data poor (as were most of the groups). This meant a lot of literature searching and model building while trying to scramble for a well defined question. Unquestionably, this lead to some frustrations early on in the week. I can say that I now have increased respect for those clinicians and researchers working tirelessly to tackle this cancer.

My primary role evolved from data analysis to leading the spatial, off-lattice model development along with Maximillian Strobl and Matthew Wicker. It was a great chance to help showcase Rafael Bravo’s newly developed java modeling framework and teach it to others. His framework should be up on biorxiv sometime in the near future.

Overall, I felt that the theme of this workshop was particularly challenging. The stroma consists of an incredible amount of complex interactions and players. Often times, the data that currently exists captures one level of this complexity, but not enough to build a fully informed model. The winning team was one that was able to reduce this complexity to a (not so) simple, but biologically meaningful model that can aid in vitro experiments to help understand one component of the stroma (T-Cell/Collagen interactions).

A huge thank you to Dr. Alexander Anderson, IMO, and Moffitt for continuing to support and develop this interdisciplinary, intense, and rewarding workshop. A big thank to Dr. Jill Gallaher, the fearless leader of our group, along with our knowledgeable clinician Dr. Robert Wenham.

If you want to see more from the workshop and what it is all about, you can head over to twitter and search #MoffittIMO.